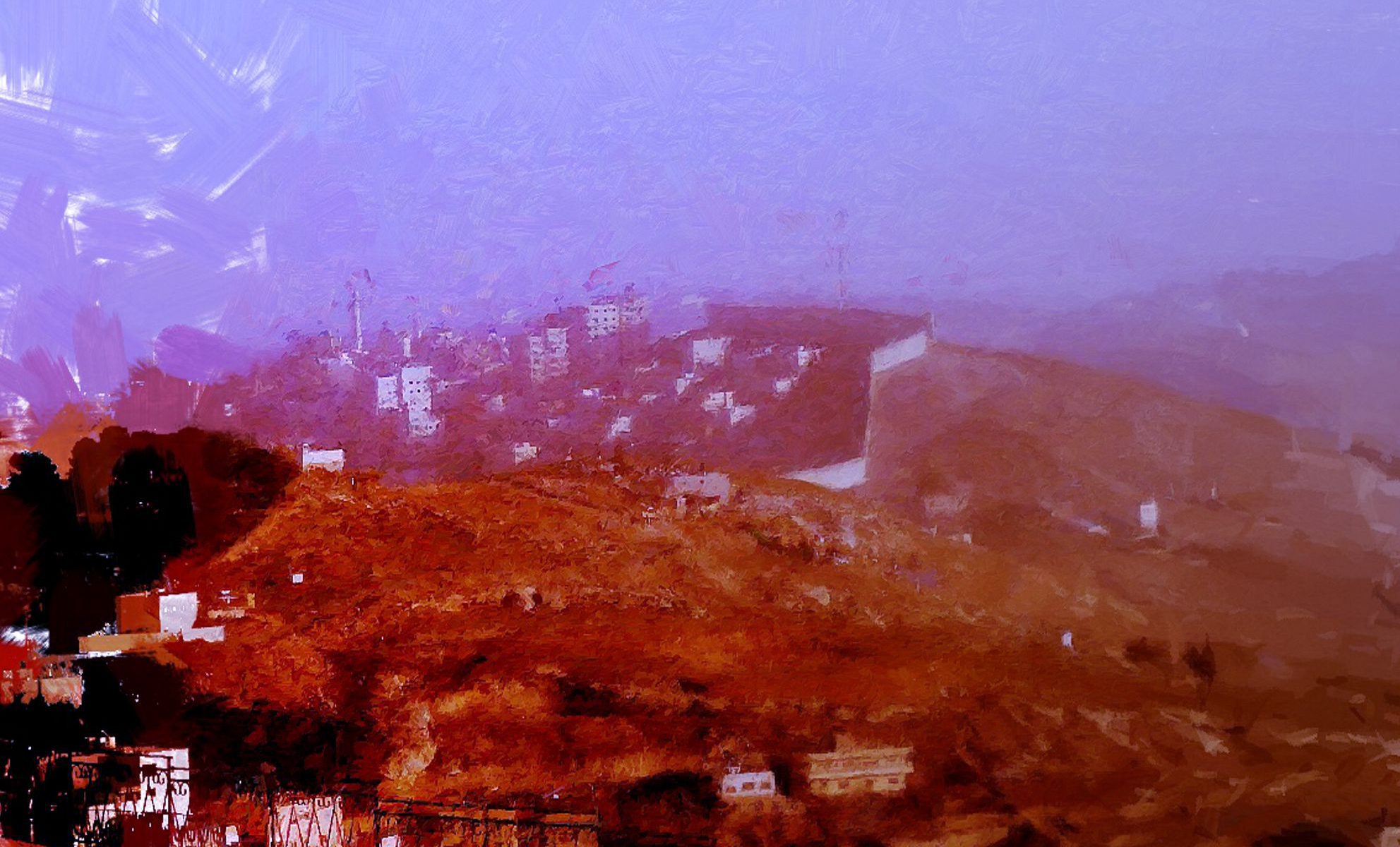 After we had talked a lot about the marked hostilities in the Middle East, especially the competition between Iran and Saudi Arabia and the determination of the Iranian government to destroy Israel, I could tell a friend of the unique possibility of making peace that life had shown me:

It all began with my second visit to Egypt in 1981/82 when I had my bed directly opposite the entrance to the sanctuary of the Hussein mosque in Cairo, in one of the two apartments owned by the Sufi Sheikh Mohammed Osman in whose spiritual community I then lived for a full year. Every day I had the opportunity to visit the sanctuary and many times I made use of this opportunity, because I wanted to experience the spirit of that place and of its history.

This sanctuary, so it is said, enshrines the head of Sayyidna el Hussein, the son of Ali, the first caliph of the Shiites – who was a grandson of Prophet Mohammed. On October 10, 680, he was killed at Karbala in a battle against a Sunni army.

Not far from the Hussein mosque there is another mosque, the famed Al Azhar whose Grand Sheikh, Dr. Al Tayyeb, is the spiritual head of Sunni Islam. The Al Azhar was built more than a thousand years ago by the Shiite Fatimids, who then ruled Egypt. The Hussein mosque was built two hundred years later, during the crusades.

I also visited Al Azhar many times, but living right next to the Hussein sanctuary, made me feel emotionally closer to Hussein. Still, the fact that these two mosques stand right next to one other I found impressive, especially after I had heard that both had been built by Shiites and that the Al Azhar had since become a symbol for Sunni Islam.

Shiite and Sunni Islam, these two schools of thought, could not have regarded themselves as enemies in the way they do today or else these buildings would not still exist. After all, the second Caliph of the Shiites was a grandchild of the Prophet!

My experiences back then have since become the background to my attempt to find a peaceful solution to the Middle East conflict – yet it took 9/11 to motivate me to dig deep into the matter.

After 9/11, I dealt mainly with the question of peace for Israel, which had become virulent after the United Nations divided Palestine, given one part to the Jews who, after repeated persecution in Europe, dearly longed for a state of their own in the area of the biblical Israel.

For the Muslim inhabitants and neighbors this came as a shock, because now, all of a sudden, the immediate vicinity to one of the most holy places of Islam, of al Haram ash Sharif, where Muslims think of Mohammed’s ascension into heaven, became a Jewish state. That radically changed the atmosphere between Muslims and Jews who had been living together peacefully thoughout the thirteen hundred years when the Muslims ruled the area.

During the times of Muslim rule, the Jews had accepted their status as dhimmis, as wards of Islam, easily. For the inhabitants of the state of Israel this was no longer an option. Besides the fact that the new Jewish state had been implanted in traditionally Muslim territory, that state did not acknowledge the superiority of Islam and, therefore, it could not be accepted by the Muslims. Thus, the Muslim neighbors refused to accept the partition of the land by the UN. The Muslim neighbors waged war against this alien implant – but they did not win the war. In the end they had to accept an armistice – which did not lead to peace.

Already in 2001 today’s Prime Minister of Israel, Netanyahu, formulated his ideas about a possible solution to the conflict in his book “A Durable Peace”. He believes that the deep resentment against the state of Israel, especially in the population of Israel’s neighbors cannot be changed by mere contracts. In consequence, he thinks that a new state of Palestine could never possess the rights of a normal state, because that would entail the possibility that a sovereign state of Palestine might team up with, say Iran, and station Iranian missiles on its territory which could not only call into question the existence of the state of Israel but could even annihilate it. Under such conditions, Netanyahu thinks that the Palestinians can never be accorded rights equal to the rights of Israelis.

While I, too, can see the deep rejection by Israel’s neighbors of the state of Israel as the main reason for the Israeli-Palestinian conflict, my conclusions are completely different – because of my experiences during my year in the spiritual community of Sheikh Mohammed Osman in Cairo.

There I could see that by nature Muslims are willing to embrace peace, but such peace must not defile their honor, so that only an honorable peace would have a chance of becoming real peace. This means that peace cannot be imposed on them – as has been the case with all the models of peace which have been presented so far. Peace had to come from the Muslims themselves.
But how could peace with the Jewish state come from the Muslims when that state had in fact been imposed on them? Would that not be self-contradictory?

A truly honorable peace will be possible only if it is not imposed! But how could the coercion which forcefully installed the Jewish state back then disappear? That coercion is a fact of history! How could such a fact disappear?
The coercion could only disappear only if the Muslims could somehow be motivated to offer that territory to the Jews as a gift. But what could motivate the Muslims to present such a gift?

It is not as impossible as it looks. Muslims could, in fact, be motivated to present such a gift by considering the succession of their prophets: Nearly all of the Muslim prophets are biblical prophets. The religion of Islam owes a lot to Judaism! But current hostilities have made men blind to that awareness and pushed it into a dark corner in the background. Yet reality speaks for itself. Muslim authorities can revive the memory. And that would not be manipulation, it would only be the reemergence of reality – not in a sense that could cause feelings of guilt because there is no reason for guilt, but in a sense that would arouse natural gratitude on a scale that would enable the Muslims to present the country the Jews have named “Israel” to them – anyway only a small gift when one remembers the fact that, without the preparatory work of the Jewish prophets, Islam would hardly be thinkable.

And at that point the state of Israel itself could make a contribution of its own: the very name “Israel” goes back to Jacob, the ancestor of the twelve tribes of Israel. Jacob was entangled in a deadly conflict with his brother Esau. Under normal conditions, the reunion between the two meant certain death for Jacob, because his brother was determined to kill him. But meanwhile Jacob was able resolve himself to do something that would have seemed impossible before. Facing certain death Jacob could now see that he had to ask his brother for forgiveness. He did exactly that. He threw himself to the ground before his brother seven times. This gestures which was almost incomprehensible for Esau moved him so deeply that he was now again able to accept Jacob as his brother. The Bible says that for showing the steadfast courage to make that gesture God gave Jacob the name “Israel”, “the one who has fought with God and prevailed”. Thereafter both brothers could live in peace as neighbors.

Today’s Israel would need something of that kind, admitting that the implanting of a Jewish state in this region was a course of action that was necessary for their survival, yet completely unacceptable to the inhabitants of the land, and consequently, that the Jews have every reason to ask the Muslims for forgiveness – just as four thousand years earlier Jacob had every reason to ask his brother Esau for forgiveness. And just as Esau was able to forgive his brother the Muslims will now be able to forgive the Jews, especially if they remember that they have every reason to be grateful to the Jews, because God chose to use the Jewish prophets to open the mind of the prophet Mohammed, thus preparing him for the new revelations of the Koran which he was to impart to him.

An essential role in bringing these facts to the people’s attention will certainly fall to the Grand Sheikh of Al Azhar, Dr. Al-Tayyeb, who has plainly already embarked on that task – first by visiting the Pope in Rome, the location of that great Council which made the deepest, most positive changes to the Catholic church’s attitude towards Islam and Judaism.
Such a council in Cairo could change the entire world, on the one hand by making room for Muslim gratitude for what they received from Judaism, and thus enabling the Muslims to present the Jews with a state of their own, Israel – on the other hand, because such a council could also cement peace within Islam – as a side effect of the location of the council, in Cairo, on the site of the two mosques, which are in Sunni territory today, yet were founded by Shiites – and are still are of the utmost importance for Shiites, Al Azhar and the Hussein mosque!